Upcoming Region 1 DVD releases:
7/7/09: The Rescue, The Romans, Attack of the Cybermen
9/1/09: The Deadly Assassin, Image of the Fendahl, Delta and the Bannermen

Release announced, date to be determined:
The Keys of Marinus
The War Games
Frontier in Space
Planet of the Daleks
Mawdryn Undead
Terminus
Enlightenment
The Twin Dilemma
Remembrance of the Daleks (Special Edition)

The 50 remaining releasable Classic Series serials with no scheduled or announced DVD release, in order of Dynamic Rankings (as of 5/26/09).
The Rankings are utilized to suggest, though not to specifically reflect, fan demand.

Middle 30
The Face of Evil, Frontios, Day of the Daleks, The Mind of Evil (requires colorization), Snakedance, The Ambassadors of Death (requires recolorization), Planet of the Spiders, Planet of Fire, The Sunmakers, The Moonbase (requires reconstruction of missing eps 1 & 3), Greatest Show in the Galaxy, The Awakening, Death to the Daleks, Invasion of the Dinosaurs (requires colorization of ep 1), The Reign of Terror (requires reconstruction of missing eps 4 & 5), The Android Invasion, Revenge of the Cybermen, The Ark, Nightmare of Eden, The Happiness Patrol, The Krotons, Colony In Space, Meglos, The Monster of Peladon, The Creature from the Pit, The Mutants, The Chase, Planet of Giants, Dragonfire, The King's Demons

The Horns of Nimon
The Time Monster
The Gunfighters
The Silver Nemesis
The Sensorites
The Space Museum
Paradise Towers
The Dominators
Underworld
Time and the Rani
Posted by John at Tuesday, May 26, 2009 No comments:

Harold Pinter died the day before Christmas. I'm astounded that his passing has gone, from what I can gather, completely unrecognized by the DC theatre community. Though I didn't expect candlelight vigils, one would think that his passing might have warranted, at the very least, a playreading series. I considered taking the reins on such a project but for my assumption that other more likely candidates would already be working on it.

I can think of two companies in particular, both of whom I've worked with at least twice, to whom they owe Pinter a huge debt. Neither of these companies did a thing to recognize Pinter, and neither have a Pinter play in their upcoming season.

I mean, come on, even Arena Stage threw The Heidi Chronicles into their 2007 season to mark Wendy Wasserstein's passing the year before.

In other news, American playwright William Gibson died in November at the ripe old age of 94. In addition to The Miracle Worker and Golda's Balcony, he wrote quite a few other notable plays that unfortunately didn't have the same pulling power; hopefully some of these might be due for revivals. Goodly Creatures, anyone? A Cry of Players?
Posted by John at Saturday, May 16, 2009 1 comment:

Doctor Who Geekery Report: The Claws of Axos (1971) 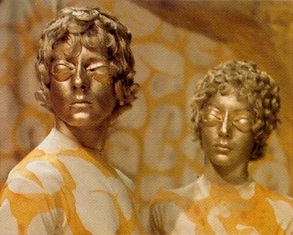 The Claws of Axos (13 Mar - 4 Apr 1971, w: Bob Baker & Dave Martin, d: Michael Ferguson)
I must sing the praises of what in my mind is one of Jon Pertwee's most under-appreciated serials, The Claws of Axos.

What I find most fascinating in this serial are the actions of the Doctor. What modern viewers must do nearly 40 years later is forget all the serials that come after, and consider only what we've seen of Pertwee's incarnation up to this time, a season and a half into his tenure in the role. He still bitterly resents his exile on Earth, things are still very tense between him and the Brigadier, and this season he is faced with the arrival of his adversary The Master who, as of the end of the previous serial, posesses one crucial thing the Doctor desperately wants: his freedom.

At this point in the series the Doctor's primary focus is bypassing the Time Lords' block on his mind so he can get his TARDIS operational; typically his other pursuits are at odds with his UNIT colleagues, often only helping when their purposes intersect or he has a personal stake. (Why was he at the Inferno project? To siphon off nuclear power to his TARDIS. Can anyone be surprised at the Doctor when, informed that the research station has their own nuclear reactor, he conveniently requests that the TARDIS be brought along?) Given the rather mercenary nature of his relationship with UNIT up to this point, plus his increasing annoyance with human society (Mr Chinn, et al), when he announces that he's abandoning Earth to its fate, it's not entirely inconceivable that he's serious. Not only that, but a proposed alliance with the Axons and the Master against the Time Lords! Can we entirely trust that he's just duping them? The Doctor's given circumstances at this point in the series are such that his potential to turn evil - or at least amoral - have never been higher.

Also fascinating is the Doctor's relationship with the Master. What gob-smacks me is the Master alone in the Doctor's TARDIS in ep 3. He comes across the mess the Doctor has left the console... and fixes it. He puts the console back together (after of course his immortal line where he compares it to a second-hand gas stove). Nothing speaks to their unspoken mutual respect or the hinted past friendship than this action (and nothing is more missed in Anthony Ainley's moustache-twirling pyschopathic characterization). And of course this has some of Roger Delgado's best moments, "Sticky-tape on the windows," etc.

And this is all mere background for perhaps the most technically ambitious production the show had seen up to this point, or for many years after. Director Michael Ferguson and the design team pulled out all the stops, and not only the interior of the Axon ship. Note that the complex studio sequences (particularly episode 4's overload of the Axon brain and the climactic battle in the accelerator control room) are all done on video, as opposed to film. This suggests that the sequences were recorded mostly live, given that they didn't have the post-production time back then, nor the time to set up individual shots. It's still impressive, although not without a bit of camp, nearly forty years later.
This is far and away Bob Baker & Dave Martin's most ambitious Doctor Who script, and in my opinion a lot of this can be credited to the fact that it's their first. There's something about first-time writers and/or first-time directors coming into the show with ambitions beyond the usual pale, not letting their imagination be hampered with BBC bureaucracy and technological limitations. See also Lovett Bickford's work on The Leisure Hive or Paul Joyce's cinematic envelope-stretching Warrior's Gate.
Claws of Axos is also very much a study in human folly, but presents it with a delicious bit of irony. The altruistic scientists want to distribute Axonite worldwide, but the greedy conservative MP's led by Mr Chinn attempt to monopolize the distribution to Britain.
Forget Pigbin Josh. Forget Bill Filer's atrocious American accent. Forget the giant Axon penis-eye. Forget that the accelerator explosion was too small. Forget the obvious zippers on the back of the Axons in their 'beautiful' forms. This was an ambitious, gripping, visually dazzling go-for-broke adventure that succeeded (mostly) brilliantly.
John's Grade: A-
Posted by John at Monday, May 04, 2009 1 comment:

Doctor Who Geekery Report: The Visitation (1982) 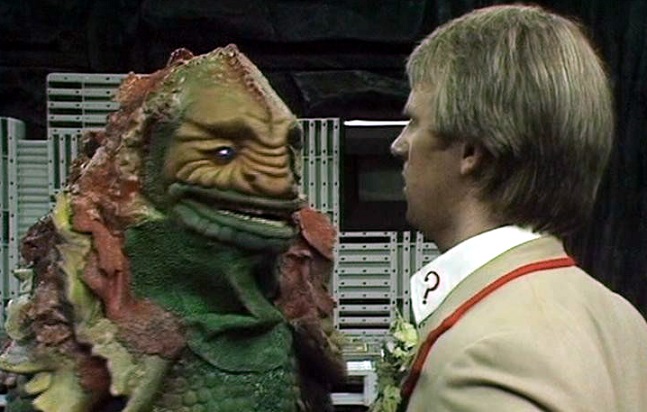 I dug out the DVD of The Visitation this morning. Although it's quite well-regarded I never quite warmed to this story, and re-viewing it did little to further endear me to it.

There are a lot of decent ingredients to this story: a few good lines, an impressive looking monster, one particularly good supporting character (Richard Mace), some decent location shooting, the destruction of the Doctor's signature prop, and an interesting premise (aliens at the heart of the Plague and Great Fire of 1666), but it's all undercut by a lack of decent plotting, scripting, directing, etc.

John Nathan Turner saddled the period's writers with having a TARDIS crew of four to attend to (the Doctor, Adric, Nyssa & Tegan). Compare with the far more effective "Kinda", which found a contrivance to keep Nyssa asleep in the TARDIS for all four episodes, and Tegan trapped inside her own mind. The crew harkens back to the early days of the program when three companions were necessary to complement Hartnell's elderly, occasionally infirm persona, and each companion had their particular function: Ian was the man of action, Barbara the nurturer, and Susan the glass-ankled innocent. But here, the Doctor is more robust and the three companions lack distinction. Although Nyssa and Adric had scientific ability, it was rarely put to use. Tegan's character served very little purpose but to whine. (Ironically, in this story, Adric is the glass-ankled one!) All three do very little except get caught, escape, look for the Doctor, etc.

A comparatively gripping opening 'teaser' sequence in which a family of generic Restoration gentry get wiped out by unseen aliens starts the first episode off with momentum, which is promptly halted by a tedious story-padding scene of the Doctor and Co. recapping the previous story, setting Tegan up for her return and then her subsequent bitching out the Doctor when the TARDIS lands some-when else. They then spend the next three and a half episodes wandering around rather aimlessly, pausing every 23 minutes or so for a weak and utterly pointless cliffhanger ("Doctor, where are you?" "Oh, not again..." "No! Don't open that!")

Save for Mace, who's all but operating in a vacuum, the supporting characters have no distinction (they're not helped by the fact that Saward has them under mind control for most of the story). One yearns for a Holmsian double-act, or, well, anything memorable.

Quite a lot of obvious effort and expense went into the Terleptil costume, but then little effort went into making the Terleptil a memorable character. Apart from an offhand reference to the Terleptils' love of beauty (certainly not supported by the ship's bland design), the Terleptils are a pretty generic race. Saward tries to get us to generate some sympathy for the Terleptil; he's an escaped prisoner, an outcast among his own people, disfigured, etc. The ingredients are there, but are undercut by indifferent writing, directing, and production design. He doesn't even get a name. Or, as it turns out, clothes.

If anything, an introductory scene featuring the team of Terleptils escaping and crashing, something to establish their characters, their backgrounds, their intentions, etc, might have gone a long way toward engendering the sympathy Saward intended. Instead we get five minutes of a domestic scene featuring characters who are promptly killed off. (If he had to go with the family, instead of being killed couldn't they have been captured, forced to do terrible things under mind control, and then liberated at the end, perhaps with the father sacrificing his life or something? That would have at least been interesting. That's arguably what Robert Holmes would have done.)

I can hypothesize that in his early drafts, Saward had set the action in the middle of London. But of course to re-create plague-ridden London in 1666 would be cost-prohibitive, so the producers had him set the action to an unnamed village outside the city (with a population, apparently, of five), only moving into London late in Episode Four so the climax, i.e. the Great Fire, could occur.

This was Eric Saward's debut on Doctor Who. One wonders what JNT saw to inspire him to hire him as script editor, other than that he wrote a story on time that fit in the budget.

Well, at least it's better than Time-Flight, but I'm not in a hurry to watch it again. At least Time-Flight is so awful that it's entertaining. This is just plain boring.