Four Gentlemen of Verona (or, "Hey, Didn't We Just See This?") We have two Equity theatre companies in the Boston area devoted primarily to Shakespeare. Commonwealth Shakespeare Company does a splashy outdoor free production on Boston Common every summer, while Actors Shakespeare Project does full seasons of edgy productions in a variety of metro-Boston venues.

I don't think the two consider themselves in competition with one another; their production dates don't overlap, they frequently employ the same actors, Comm Shakes has at least three times ASP's budget, and they arguably are going after different audiences. 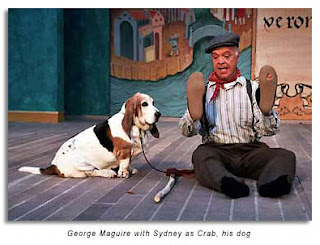 ASP is about to open the second production of its season, Two Gentlemen of Verona, next week. Yesterday Comm Shakes announced its upcoming summer production, and its... yup. Two Gents. Two professional productions of the same play in the same region, eight months apart. As it turns out, this is the second time this has happened in three years; they both did Othello in 2010.

This is odd to me. Even if the two companies don't consider themselves in competition, I'd've assumed they consulted one another regarding play selection; some kind of "I call dibs on Hamlet next year" kind of gentleman's agreement. Or Rock-Paper-Scissors. Guess not.

Given that ASP announces its season well in advance, the onus is on Comm Shakes to take ASP's season into consideration; apparently they don't. I don't know nor will I speculate what ASP thinks about this. The differences between the two companies are such that ultimately the effect on each others' audiences is negligible, so I guess in the end it doesn't matter.

Among Boston's fringe theatre scene there has been a fair amount of similar instances. In the past year, for example, two companies did Romeo and Juliet within days of each other, another did a play a professional company on the Cape had done three months prior, another is doing a play performed six months earlier by Boston's local youth troupe, and two companies recently announced the same production to be performed within a year of one another. (UPDATE: a local company just announced they're throwing together a benefit production... of a play another local company is opening the following month.)

These companies are chasing the same audiences, so it does matter. A hundred tickets can separate financial solvency from ruin. There are other considerations as well - companies producing the same play so close together invite comparison and competition. The producers of the first production then is tempted to become protective of their artistic choices, and issues of intellectual property rights then come into play. This promotes competitiveness, divisiveness, secretiveness and disharmony, which is cancerous for a scene that requires unity, openness, and collegiality to survive.

It would be prudent, then, to establish some sort of Best Practice standards regarding play selection. I submit the following.

Keep the lines of communication open. If they bring you a script and don't hear from you, they have no way of knowing that you're laying the groundwork while they're off pitching it to another company who might just wind up greenlighting it first.

Or maybe they didn't pitch it to you; maybe they just mentioned a particular play near and dear to their heart. If you're suddenly struck with an all-encompassing desire to produce this play yourself, it's only fair to mention it to them beforehand, get their okay, ask if they want to be involved somehow, etc. Otherwise you're stealing their baby.

Maybe it's a play that you've discovered yourself, something you've been dying to produce since you first read it or saw it years ago, or whatever. Before you announce it to the world, avail yourself of the nearest available Internet Search Engine, be it Google, Bing or - god forbid - Yahoo, and check to see if it's been produced locally in the last few years, or if it's already slated for production by another local company.

Okay, so you've committed, come hell or high water, to doing a play that another group is doing a few months or weeks beforehand. As an actor, if I'm in a play that's been made into a movie I make a choice not to see it. I want my creation to be my own, and not influenced - even unconsciously - by someone else's specific choices. And in this case, that prior company's design choices, directorial choices, etc, are their own intellectual property.

On the other hand, if you're the company doing the prior production, you have the option to reach out to that other company and talk about a co-production. Neither you nor they have a monopoly on good ideas; by unifying your efforts, you might have a better show. And you're also splitting your production costs. Why work apart when you can work together?

I understand that it's unrealistic to expect every theatre company to get together once a year to  hammer out a season in which nobody doubles up. But it is possible to observe some guidelines.
At the root of all of this is simply this: although there needs to be some incentive to do the best work we can do, we shoot ourselves in the foot when we work against each other, or needlessly duplicate efforts, or engender bad faith amongst one another. Onstage and off.

Though I should add that there are circumstances when two companies doing the same play becomes a political statement. A few years ago in DC, Shakespeare Theatre Co announced a forthcoming production of Romeo and Juliet that would be performed in the Elizabethan performance convention; i.e., all the female roles would be played by young men. The all-women fringe company Taffety Punk immediately announced they'd be doing an all-female version that would go up around the same time. Go, grrrls.