I have a long, sad history of Picture Days... my pen explodes and I only notice after smearing ink across my face, or I forget and wear something completely inappropriate, or the fates combine to create the worst hair days of my life. I've included two such instances here. (See, folks, I hold nothing back.)

August 1989. Picture an awkward 18-yr old rousted out of bed one morning at Freshman orientation and colliding, bed head and all, with an oncoming camera. The result was my student ID for all four years... 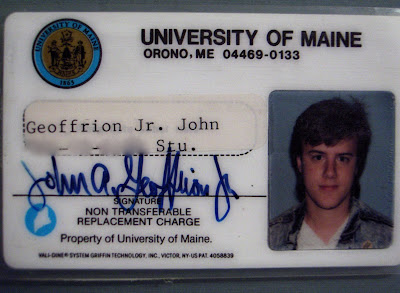 The denim jacket (stonewashed! how utterly 80's!) was covered in political buttons; the one visible button here says "UNILATERAL DISARMAMENT." I really miss the vintage "ARCHIE BUNKER FOR PRESIDENT" button that I lost. They had a tendency to fall off. The rest are in a drawer somewhere.

Fast forward to February 1993, yet another frigid, snowy Up-Maine winter. A senior, heretofore pre-occupied with various theatrical and scholastic pursuits, is walking through the student union when he realizes this day was the deadline for senior pictures. In he goes, ratty-ass sweater, hat hair, and all. He makes a rushed attempt to wet the hair down as best as possible, and out of the several pictures, this one, unfortunately the best of the lot, goes into my college yearbook... 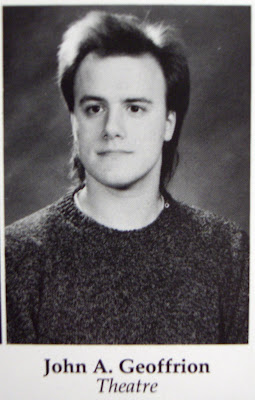 So maybe what's holding me back from being famous is the fear that embarassing shit like this will be dredged up, perhaps on some VH-1 "Before they were stars" type deal. And if not, then this definitely will...

From the movie "Downfall" (Germany, 2004, d. Oliver Herschbiegel, with Bruno Ganz as Hitler)

The only criticism I can think of: after the leisurly paced Act I, Act II comes off like the second season of Rome, trying to squeeze in too many events in too short of a time; the finding of the golden fleece, the wooing of Medea, the terrible return voyage of the Argo, Jason's betrayal and Medea's meltdown. I got the impression that it started off as a much longer play - three, maybe four acts - and that Zimmerman kept Act I intact and boiled the rest down to a second act.

Otherwise, the staging, the ensemble, the lovely set were just wonderful. A neat trick: Medea is pierced by Eros' arrow, and she spends the remainder of the play (until she does the fatal deed) with the arrow sticking through her. Her blouse gets progressively bloodier with every entrance, echoing her descent into madness.

A Thought For Today.

As flies to wanton boys are we to th' gods.
They kill us for their sport.
(Gloucester, King Lear IV.1) 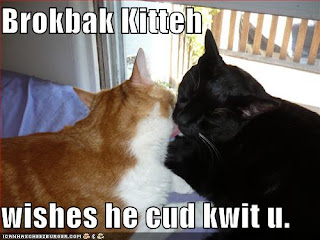 Email ThisBlogThis!Share to TwitterShare to FacebookShare to Pinterest
Labels: Celebs

This Is Just To Say
William Carlos Williams

I have eaten
the plums
that were in
the icebox

and which
you were probably
saving
for breakfast

Forgive me
they were delicious
so sweet
and so cold


This Is Just To Say
Erica-Lynn Gambino

I have just
asked you to
get out of my
apartment

even though
you never
thought
I would

Forgive me
you were
driving
me insane


(The Moral: Leave the fucking plums alone already - JG)
(The Amoral: Stealing plums leads to a pair of brilliant poems. Worth it. - JG)

Email ThisBlogThis!Share to TwitterShare to FacebookShare to Pinterest
Labels: poetry

Kafka's Dick closed today, ending a seven-week run in rep with The House Of Yes, which has been extended another week.

There has never, in the whole of my career, been such a wide gulf between the critical and audience accolades we received and the absolute fiasco that I anticipated toward the end of the rehearsal process. I still can't say that I agree the production was as successful as the rest of the world thinks, but I'm ready to acknowledge that there's a lot I don't know.

I feel like George Bernard Shaw at the premiere of Arms And The Man. The final curtain brought thunderous cheering and applause, but as Shaw stepped out for the curtain speech, one single piercing "Boo!" Shaw's reply: "I agree with you, sir, but who are we to argue against so many?"

About half the time, we had small audiences of statues who tittered awkwardly, applauded at the end purely out of obligation, and got the hell out of there. Those shows were purgatorial, for us and for them. The rest of the time, the place was packed, they laughed at everything, and bubbled over with enthusiasm upon greeting us in the lobby. Those shows were awesome. After seven weeks, however, we were all ready to put it to bed.
Posted by John at Sunday, January 13, 2008 No comments:

Sometime Saturday in between the matinée performance of The House Of Yes and the evening performance of Kafka's Dick, someone appears to have swiped WSC's cash box from the box office. They need to abandon that gravitational eddy of bad vibes as soon as their new space is ready. Even the rats have long since abandoned the place.
Posted by John at Sunday, January 13, 2008 No comments:

A note on the pervasive influence of Fox News

Had lunch with a friend this afternoon, and on the way back to the office I stopped into Soho in Dupont Circle for a coffee. On the counter were a pile of Hillary stickers & buttons. When I commented 'gosh, I guess it's clear who you support', the manager said (paraphrase) "I don't want no terrorist for president. He's hiding something about his past..." I might expect this from a right-wing wacko, but from a Hillary supporter? Dang...
Posted by John at Tuesday, January 08, 2008 1 comment:

Sonnet #20
One of the most overtly homoerotic of Shakespeare's sonnets.

The identity of the young man to whom Shakespeare wrote the majority of these sonnets has provoked centuries of heated scholarly debate. Most agree that he is probably the "Mr. W.H." to whom the sonnets were dedicated, but theories diverge as to just who Mr. W.H. was. Some see the repeated word "hue" in line 7 as a clue, plus several instances in other sonnets where the word "Will" appears italicized in the 1609 printing, and leads them to invent an imaginary boy actor named William Hughes (a lengthier discussion can be found here), upon whom Oscar Wilde bases his short story The Portrait of Mr. W.H.. The majority swap the initials to come up with Henry Wriothsley (pronounced "rose-ly"), 3rd Earl of Southampton, the young nobleman who was Shakespeare's early patron.

Geekery Alert: Shakesonnets are written in iambic pentameter, i.e. ten syllables, accent on the even ones (dee DUM dee DUM dee DUM dee DUM dee DUM). In the case of Sonnet 20, each line contains an extra unaccented syllable at the end. These are known as 'feminine endings,' which for a sonnet written to an androgynous youth is a lovely connection between form and theme. Also note the 'cocky' punnery in line 13.

A woman's face with Nature's own hand painted
Hast thou, the master-mistress of my passion;
A woman's gentle heart, but not acquainted
With shifting change, as is false women's fashion;
An eye more bright than theirs, less false in rolling,
Gilding the object whereupon it gazeth;
A man in hue, all 'hues' in his controlling,
Much steals men's eyes and women's souls amazeth.
And for a woman wert thou first created;
Till Nature, as she wrought thee, fell a-doting,
And by addition me of thee defeated,
By adding one thing to my purpose nothing.
But since she prick'd thee out for women's pleasure,
Mine be thy love and thy love's use their treasure.
Posted by John at Wednesday, January 02, 2008 No comments:

On the turn of the new year, and in the spirit of renewal and re-birth, some wisdom from someone who left us last year.

Hello, babies.
Welcome to Earth.
It's hot in the summer and cold in the winter.
It's round and wet and crowded.
At the outside, babies, you've got about a hundred years here.
There's only one rule that I know of, babies:
God damn it, you've got to be kind.

From "God Bless You Mr Rosewater, or: Pearls Before Swine" by Kurt Vonnegut (1965)
Posted by John at Wednesday, January 02, 2008 No comments: