I've finished watching the newest season of Dr Who, with Matt Smith as the Doctor.

I like Matt a lot, much more than I thought I would when he was announced. I confess to a bit of age prejudice, given that he's only 27. But he succeeds in capturing the essence of the Doctor. He's alien, he's funny, he's dark, he's hyperintelligent, he's awkward... he evokes the classic era of Doctor Who, where characterization trumped - by necessity - special effects. He has the rumpled integrity of Patrick Troughton and the boyish charm of Peter Davison.

He does lack, however, the gravitas of Tom Baker, as well as the sexy charisma of his predecessor David Tennant, and I suspect that over the long term this may prove detrimental to the show. Tennant was responsible for expanding the show's appeal globally. It grew, over three years, into a show that was must-see viewing, rivalling Lost, Battlestar Galactica, and even it's own spinoff Torchwood. I don't know if the new fans that the show gained with Tennant will stick around.

The companion is a plus. Amy Pond is likable, self-sufficient, spunky, tortured, and really pretty. I'm largely immune to that last quality, but she also scores points for a Scots Burr that, unlike Tennant, she doesn't mask for the role. And I adore Rory and their relationship.

I also love River Song. Her character is the greatest non-Companion addition to the series since the Brigadier and the Master, and she's skirting the dividing line of actually being more interesting than the Doctor.

Why aren't I as emotionally invested in this season as I've been with the other New Series seasons? Why am I more excited about receiving The Time Monster, Underworld, and The Chase (arguably the worst stories in the Classic Series' canon) on DVD in the mail this week?

The stories are decent. The writing is solid (which I figured would be a given, with Moffat producing). So why am I missing Russell T Davies and his occasionally questionable contributions to the program? Thankfully there are no farting aliens, no Jackie Tyler, no pigs in space uniforms, no Absorbaloffs, no smarmy Captain Jack, no dredging up Rose Tyler yet again, no instant daughter, no human/Dalek hybrids, no Mini-Me Doctor...

...but then again, for every one of those forehead slapping moments, there was the iconic moment or the brilliant idea: the Doctor meeting a Dalek for the first time since the Time War, "Are You My Mummy?", Rose and her father, Sarah Jane and K9 returning, Daleks vs Cybermen, the Asteroid containing Satan's lair, the Doctor losing Rose, the Chameleon Arch turning the Doctor human, the entire episode of Blink, the return of the Master, the chill of Dr Moon: "your reality is a lie, and your nightmares are real"... I could go on.

If there's a fault in the Matt Smith/Steven Moffat era thus far, is that it's too safe. They're not going big. The crack in time is a very solid unifying concept, but I kept waiting for that big choice. That over-the-top, fandom-splitting, attention-getting moment that attracts the interest of the non-fan. Though hardly boring, I can't think of a Major Iconic Moment this season. We got another old enemy returning, but so far removed in design and characterization that I wondered why they bothered. They brought back a Cyberman, but by making it say "You Will Be Assimilated", it's not even pretending to be anything else than Budget Borg. They tried to go for the big Emotive Moment with the Van Gogh episode, but not only did I feel manipulated, but I kept wondering why they broke the Cardinal Rule of time travel by bringing him forward to the present day and making him aware of his legacy? Why was I shocked but not shattered when Rory died?

They almost hit it a few times. The big reveal of the nature of The Beast Below. The unexpected humor in "Vampires" and "Lodger". The Valeyard-evoking Dream Lord. There are no clunkers this season (although Victory of the Daleks and Hungry Earth/Cold Blood come close), but no home runs.

To take that baseball metaphor further: with RTD we got a lot of strikeouts, but a lot of home runs and bottom-of-the-ninth walk-offs. With Moffat, we got a steady streak of singles and pitchers duels. Singles win games too, but lack the drama and celebratory catharsis of homers. What baseball game would you rather watch?

I'm not overly worried, but I want more. You've got nine months, guys. Get moving.

Email ThisBlogThis!Share to TwitterShare to FacebookShare to Pinterest
Labels: Doctor Who, geekery, reviews 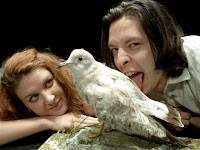 But ultimately I can either obsess until I'm blue in the face about what didn't happen this year or be grateful for what did. What we did get was a tight band of friends, loved ones, colleagues and general public who came and greatly enjoyed The Nina Variations. It's still one my favorite plays, and being so easy and relatively inexpensive to produce, I can do it again whenever and wherever I want. So I'm not sorry. At all.
Posted by John at Monday, July 19, 2010 No comments: