In February 2010 I'll start rehearsals for the fifth production of Our Town that I've done in my career. I won't pretend that Our Town is the greatest play ever written (or even the best play Thorton Wilder wrote), but I think it's a charming and special piece, and many of the productions marked tangible upticks in my slow & steady growth as a professional actor. I more-or-less fondly remember all of them.

Not that happy a memory. The production was kinda by-the-numbers and uninspired. The actor playing Doc Gibbs, from NYC, found the play uninteresting and the characters boring, so he took it on himself to shamelessly mug out of a compulsion to inject some life into it. I played the Constable, and spent a hour applying very unconvincing old age makeup to accompany my unconvincing performance. Yawn. 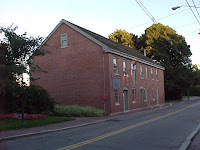 The first play I did upon returning home after graduation, and the first show I did at the Players' Ring, my virtual second home for about eight years, and my first time working with its founder Gary Newton, the closest to a theatrical mentor I ever had. My first show with Theatre on the Rocks, a community/semi-pro group I'd go on to work closely with for many years, and my first time working with several cherished friends and colleages including Bruce Allen (father of Susan, who was Mrs Gibbs in OT #1), Anne Rehner, Tina Cunningham, Mike Pomp and Bill Beaman. A few of the cast are no longer with us: Fred Bresette, Frank Frisbee, and if memory serves, Barbara Randall.

My turn as George Gibbs pretty much marked the beginning and end of my career as a male ingenue. I got the role in what was pretty much the standard fashion at the Ring at the time: I was the first age-appropriate male to show up at the audition (luckily I was also the only one). No disrespect intended, but the role of Emily should've gone to the girl who walked in second.

The Ring was a nice place to do Our Town. The theatre was an intimate thrust stage with red brick walls, timber posts & beams, etc., which did much to create the turn-of-the-century atmosphere. Theatre on the Rocks was a community group at the time, and it kinda had the earmarks of a community theatre production in terms of acting, and I was hardly an exception. What I remember most was the two boys (Wally Webb and one of the Crowells) constantly busting up during rehearsals; when Rebecca and George wax philosophical over the full moon, they'd stand in the open loft over the stage area and drop trou.

This was intended as a benefit production for the renovation of Centennial Hall into a performing arts space; it had stood virtually empty for decades. The upstairs hall had no working lights or any sprinkler system, and both deficiencies bore bitter fruit. After a tech rehearsal, Bruce Allen (playing the Stage Mgr) fell down the dark back stairs and broke three ribs. Then on the day before the first show, we were shut down by the town Fire Marshall. Some last-minute scrambling led to our moving to the nearby middle school, and our first run-thru was our opening performance. Bruce, who has endured more physical ailments than most mortals could, performed admirably, all but propped against the proscenium arch since he could barely move.

I'd heard that many of my colleagues were doing an Our Town, and I was a little pride-wounded about not being asked or approached. I got the director's number and called her - pretty uncharacteristically bold for me - the role of Simon Stimson was still open, and she cast me over the phone. The cast was a mixture of amateurs (George was the shopping-cart collector at BJ's... I can't even remember who played Emily) and semi-pros, and some of the latter behaved better than others. The director, though never to be mistaken for Elia Kazan, had to brave more than a few instances of diva fits and actors feeling obliged to direct the play for her. Meanwhile I stayed quiet, giving more than my share of piggyback rides to the young'uns.

I loved playing Simon. I played him rather dark and over-the-top, and it was a nice character stretch for me, going out of my typically squishy comfort zone.

As far as I know, the renovation of Centennial Hall is still ongoing, ten years later.

This was my first professional summer stock season. At the time, I was mourning the passing of Gary Newton, and had been accepted into the Actors Studio MFA Program at the New School in NYC, facing a future watching James Lipton ask Sylvester Stallone what he'd want to hear God say... I deferred enrollment a year, and eventually declined altogether, though I would move to NYC the next summer. Gary had written recommendation letters for both Peterborough and the Actors Studio shortly before passing.

This was a very special production. Thornton Wilder was staying at the McDowell Colony in Peterborough when he wrote the play, and he used P'boro as his inspiration for Grovers Corners. He also oversaw its first post-Broadway production at the Players' grand old barn. I'd taken a day-trip up to the town a few months before, and was struck by just how beautiful the town was, and still had the same character as it did when it was written and was set. I discovered one of the town's old cemeteries, which I am sure had to be the one Wilder had in his mind when he wrote Act III.

Venerable actor James Whitmore played the Stage Manager (I have to confess I didn't know who he was when I first heard his name), but I was most excited about working with Mary Beth Hurt as Mrs Webb - she was Robin Williams' wife in The World According To Garp, one of my favorite movies. Jayne Houdyshell, who has since gone on to a Tony nomination and several Broadway roles, played Mrs Gibbs.

George and Emily were played by Peterborough's principal set of ingenues, Kraig Swartz and Savanne Martin, who at the time were past 30 years old. To their credit, they were more than able to convincingly play teens (for a counterexample, see William Holden and Martha Scott in the 1940 film, who look practically middle-aged). Director Gus Kaikkonen threw in a few shout-outs to Peterborough; the hymn sang in the wedding was written by a turn-of-the-century resident. The set looked like a bare stage, but it was illusory; the designer built walls that evoked and extended the rough-hewn wood of the ancient barn onto the stage.

James Whitmore (dubbed Jimmy-B, for "Jimmy Bigtime", by the interns) had his own dressing table made up specially for him offstage, rather than in the dressing room with us. Fair enough, venerable old actor's prerogative. I've got a nice pic of all the male castmembers (save Jimmy B) on Facebook somewhere. Meanwhile, we interns were reflecting on how cool our lives were as we sat at a cast party - along with the big names in the cast, Mary Beth's husband Paul Schrader (screenwriter of "Taxi Driver," among others) was there, and we felt like rock stars.

As one of the Act III dead, a curious tendency of mine came to the fore. It also occasionally happened in OT #3 as Simon as well. Sitting perfectly still and staring straight ahead, narcolepsy would kick in and I would regularly fall asleep; every rehearsal, every performance (except the one where a spider crawled up my neck). As far as I know I never snored, and I never missed a cue. It also spilled over into my offstage world one night, as I briefly nodded off while driving. A similar situation, sitting still facing straight forward into bright approaching lights. Luckily I didn't crash.

Jimmy B would return regularly to Peterborough in following years, including a recent reprise of Our Town, before he passed away last year.

I'm really looking forward to this production, though not necessarily the commute. This is the first time I've earned EMC points for actually being onstage in a featured role (as opposed to ensemble and/or understudy), and the pay is quite decent. The option's (narrowly) open for me to do dialect coaching - I did a research project on the Northern New England dialect in grad school, and put it to use a few yrs back in Desire Under The Elms. I'm also going to be assigned one of the young'uns in the cast to mentor. Lord help the wee lad.

So counting OT #5, I'll now have played or understudied every adult male role, except Prof. Willard and Joe Stoddard. Maybe I can check them off for OT #6, if the trend continues, on Broadway in about 5-10 years.
Posted by John at Friday, September 25, 2009 No comments: