John's Boston Debut: THE MASTER FORGER (and a special deal for my readers) 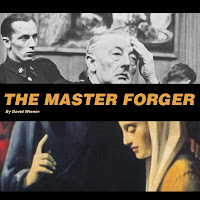 In the days following the end of WW2, wealthy Dutch art dealer Han van Meegeren faces the death penalty for selling a priceless Vermeer to Hermann Goering. Van Meegeren offers an unusual defense: he's no traitor, he's a forger. HE painted it, along with numerous other recently discovered 17th-century Dutch masterpieces. Now to prove his innocence, van Meegeren must paint for his life. Come see David Wiener's stage adaptation of the true story of the greatest art fraud of the 20th century!

Use the promo code CANVAS when ordering online to get $12 tickets (normally $15/$17)
Order tickets here
Posted by John at Friday, January 28, 2011 No comments:

How Theatre Saved My Life (And Possibly Yours)

The more I read about Jared Lee Loughner (Washington Post article) and his unhappy teen and young adult years, a chill runs down my spine because his life bears striking and eerie resemblance to mine; I could easily have gone down that same spiral, and for all I know might have snapped like he did but for fortune, a handful of choices, and the love of friends and family. Oh, and Drama Club.

I too was an only child (though not quite) of a Vietnam vet father with his own set of demons to wrestle with and a teen mother who didn't really find herself until my own teens. I had neither an especially happy nor unhappy childhood, and my family could have been described as dsyfunctional. My parents were never a good match, and I realize were it not for my pending arrival they'd never have continued to date, let alone marry. My early childhood was in a trailer park. My parents fought often. On my tenth birthday they announced they were separating, and eventually they divorced. Dad never remarried, and drifted through periodic employment. Mom got her real estate license and became very successful, and its just easier for me to refer to her long-term fiance as my stepfather.

I was quite a sheltered and solitary person as a teen. Undersized (a 90-pound freshman), scrawny and awkward, I was usually the class punching bag, I never sought out friends (the few I had initiated friendship with me), I didn't date at all, rarely socializing except for group activities (Boy Scouts, wrestling team, drama club, etc). I distinguished myself scholastically though I was rather unmotivated, half-assing my way to B's and occasional A's. With a bit more effort and/or focus I would have easily graduated top of my class (instead of 8th out of 80) and gone to a better school than the University of Maine, in which I enrolled mostly by default. I interviewed at Dartmouth, and am pretty sure I'd've gotten in, but let the application deadline pass. My lack of social skills and the intensely competitive scholastic environment would have caused me to either rise or sink, and subconsciously I believed I'd've sunk. I had enough trouble with the honors classes I did take at UMaine, though I did have a respectable GPA and graduated with High Distinction.

My work history during and after college? Pretty much just like his. McDonalds, slinging popcorn at the movies, theatre camp counselor, Applebee's, a copy center, BJ's Wholesale Club, helping my stepdad (a contractor) at his building sites, and some of Kittery Maine's finer retail outlets. Eventually in my mid-20's I realized the co-workers my age were either upper management, mentally challenged or had some severe socialization issues, and that I could do better. A big step for me was when I got a job correcting achievement tests; for once I was actually using my brain and eventually I was promoted, temporarily at least, to trainer. Then I started temping at real live office jobs, demonstrating my skills with MS Office, and even landed an actual honest-to-god permanent job at Liberty Mutual, though I quit after six months for a theatre internship. I ended a nearly four year job at a major environmental non-profit when I moved up to Boston this fall. Longest time I ever spent in one workplace.

Given that my usual routine when I didn't have rehearsal or a show was to stay home and watch TV, my romantic life was pretty much a joke. I do not recall asking anyone out in my entire life face to face. I rarely went to bars, and when I did it was with a group of friends. Hell, were it not for the internet I might still be a virgin. And when I did date, rarely did it go beyond a few encounters. I learned that six months of flowery discourse via email with someone 500 miles away is trumped by one incredibly awkward weekend face to face. I also learned that there are people out there even more socially challenged than I, and dating them for a year or so won't fix them. Now I'm in a stable relationship of over two years. Well, the most stable to date.

There have been bad days. Days that could've sent me down a bad direction. One day during college, my tendency of emulating people that I admired/fancied to the point of copying was rather tactlessly pointed out to me, in front of my best friends and the person whom I admired/fancied. My humiliation burned inside me, and as I later sat alone that night and watched a news documentary about serial killers, my mind went to some really dark places. Thankfully I didn't linger long.

It's often occurred to me that I have traits similar to people with mild cases of Asperger Syndrome.

So I'm an intelligent, artistically gifted but socially awkward loner with a history of underachievement and underemployment. I'm a prime candidate to have turned into Jared Lee Loughner. So why didn't I? My best answer, along with that I managed to steer clear of drugs, hard liquor, and The Catcher in the Rye, is that I found the performing arts.

I'd been part of some school play or other since kindergarten, though the drama bug didn't really hit me until my freshman year of high school. Joining the Drama Club was one of the first close experiences I had with other people, working as an ensemble toward a tangible goal, experiencing success as we won statewide drama festivals. Although the next three years weren't as fulfilling (the drama coach left, and I found his replacement intensely disagreeable), I majored in theatre in college. Even though my talent level and social skills relegated me largely to supporting roles, I kept at it after college. I was lucky to live in an area with a large community/semi-professional theatre scene, and I spent several years working with amazing and talented people. The most important thing I gained from this experience was a peer group. A collection of colleagues and friends that I could bond with. I grew as a person, and consequently as an artist. I wasn't that good when I graduated from school, but I kept getting better. Today I'm no DeNiro, but I know what I'm doing, I almost always have a show in the pipeline, and have made strides as a local arts advocate.

Even though I was pushing carts at BJ's (along with some scary, maladjusted individuals) or temping, I was regularly acting, producing, directing, writing reviews and articles, and was a respected member of the local artistic community. That kept me going, even through occasional bouts of depression and loneliness.

My social limitations may be partly responsible for not achieving as much as I could have by now. Or I can use as an excuse that my straddling of two worlds, my work world and my acting world, has kept me from success in one world or the other; I've given up jobs for theatre gigs, and I've often foregone auditions at larger theatres since I'd never be able to get the time off from work. I'm approaching my 40th birthday and most of my peers and colleagues are at least a decade younger than me. Sometimes this bothers me.

But then I wonder what my life would have been like if I didn't go into theatre. I might have majored in math or science, I might've flunked out, I might've drifted between menial jobs, and the life I wanted might have drifted further and further from my fingers. I wonder when, if ever, I'd've moved out of either of my parents' houses. Or somewhere along the way I'd've stayed in retail and gone into management. I'd be depressed, bored, unfulfilled and alone. I might've gotten increasingly bitter and angry. I might've gone into some of those dark places and not returned.

Of course, then again maybe not. But it worries me.

I also worry that there are thousands, even millions, of people who weren't gifted with some of the social instincts that others possess, and but for a few fortuitous choices or events might wind up snapping like he did. I don't necessarily believe in evil, but I do believe that societal outliers are much more susceptible to mental illness, and their lack of ability to form positive human connections makes them prone to a spiral of bitterness, conspiracy theories, paranoia, and schizophrenia. And given that this is America, where thanks to the Second Amendment the mentally ill can get guns a whole lot easier than treatment, there's always going to be another Jared Lee Loughner. Or George Sordini. Or Seung-Hui Cho. Or Eric Harris and Dylan Klebold. Or Ted Kaszcynski. Or Mark David Chapman. Or John Hinckley. Or Charles Whitman. And so on and so on.

I won't be so naive to suggest that taking a drama class would've kept these people from becoming killers. But theatre has turned lives around. Gary Sinise would arguably be stealing cars today instead of being an Academy Award nominated actor who founded one of the best regional theatres in the country had he not been approached by a drama teacher to be in a high school production of West Side Story. Somewhere along the line these people needed to find something or someone that didn't make them feel so alone, that gave them some positive direction in their lives. A sense of purpose. Some hope. Some love. Drama Club or not, just someone to reach out to them. Their victims might still be alive today.

Or we can just do what America seems to do best: push these people to the fringe of society, let them simmer until they snap, react with sorrow and outrage, point fingers, bury their victims, execute/imprison/commit them, and wait for it all to inevitably happen again.

My life is far from perfect. But theatre keeps me afloat, and I'm forever grateful that it's in my life.
Posted by John at Thursday, January 13, 2011 3 comments: