Alas, no lengthy Stanley Cup run this year. After probably the most stirring performance since the early 90's Saturday night during Game Six to force an improbable deciding seventh game against the heavily -- nay, universally -- favored Montreal Canadiens, the Bruins came up short and lost, 5-0.

Nonetheless, Boston fans were surprised and delighted to learn that they did indeed still have a professional hockey team in town. Hopefully their young players will stay around to grow and blossom, and maybe management can attract a top caliber player to provide leadership and a whole lotta goals, and hell, sky's the limit.
Posted by John at Monday, April 21, 2008 1 comment: 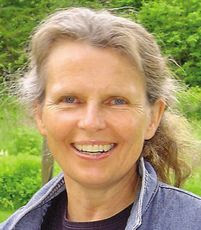 I was sad to learn this week that my elementary/jr high/high school art teacher Marcia Ryder lost her battle with cancer on April 1st.

She taught in the Kittery school system since the early 80's when she had to push her art materials from class to class in a shopping cart because we didn't have a dedicated art room. In high school (where we did have an art room), she let me spend my study halls sitting in on her class when I wasn't taking art as part of my official class schedule. She inspired me a lot, having spent her entire life dedicated to her passion. I'm trying to do likewise.

She and her husband had a blog where they journalized the various stages of her battle. It's very touching.

As I slouch inexorably toward early middle age and despite my distance from home, I still maintain the reminants of my childhood sports alliegences. Once a year, I pull on my throwback jersey and catch the Bruins whenever they come to town; been to Madison Sq Garden and saw them beat the Rangers twice, been to the Verizon Ctr twice. Last month was the nadir, however, as I shelled out $56 for a front row upper deck center ice seat to watch them get ass-raped by the Caps, 10-2.

The heyday of my Big Bad Bruins of yore are long past. Plagued by stingy ownership and (until recently) toady management, they've spent the last fifteen years or so on a long, slow, sad fade into irrelevancy while the exploits of the Pats, Red Sox and recently the Celtics have nudged them off the front page of the sports section. Cam Neely? Terry O'Reilly? Ray Bourque? Long gone. Their last Stanley Cup? A month before my first birthday.

So it's been great to see them fighting like hell to stay alive against the top-seeded Montreal Canadiens (who went an embarassing 8-0 against the B's during the season) in the first round of this year's playoffs. Last night in Montreal, facing elimination in Game 5 of a best-of-7, they finally appear to have solved the Canadiens' rookie goalie Carey Price, utterly schooling him with four 3rd-period goals to secure a 5-1 victory and force a Game 6 on Saturday back in Boston. They're still a longshot but hey, anything can happen.

I love this silly playoff commerical that NESN is running (I saw it last week while at a work conference in Boston); the only caveat is that they lied about all games being broadcast on NESN-HD. Game 5 was bumped onto their non-HD channel in favor of an inconsequential early-season Sox-Yankees matchup. Shame on them for overlooking the best game the Bruins have played all year, but that's an unfortunate reflection on the clout that the Bruins have of late. Alas.

Romani Ite Domum, or How I Won't Be Spending My Summer Vacation 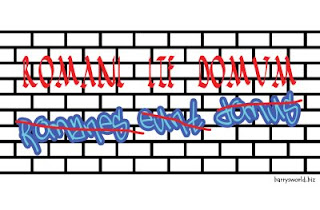 Well, my summer plans are now up in the air, as I have learned that Washington Shakespeare Company has been forced to indefinitely postpone their June/July production of "The Romans In Britain."
Turns out that WSC's application for the performance rights was declined, despite much begging and pleading on their part, and much regret on the playwright's agent's. It's been hinted that there may be a large-scale production in the works which involves global exclusivity... maybe the National Theatre in London is reviving it?
In any case, there are a lot of chagrined actors who, like me, have dropped out of and/or turned down other shows to be a part of "Romans." I predict a future encounter between myself and the producer of one such show that will not be a particularly happy one.
Not for naught do the play publishing companies like Sam French and Dramatists repeatedly say in their websites and catalogues... DON'T CAST, PUBLICIZE OR MAKE ANY LONG-TERM PRODUCTION PLANS UNTIL YOU'VE SECURED THE RIGHTS!!
I recall a legendary local anecdote from a few years back concerning a very awkward phone conversation between an Artistic Director and a famous and notoriously prickly playwright over not entirely dissimilar circumstances. I wonder sometimes if people ever actually learn anything.
To their credit, WSC has weathered crises like this in the past, and have managed to make some rather tasty lemonade out of their lemons. Last season they had to scrap a production at the last minute, and they nonetheless managed to create an entire new production -- a world premiere, no less -- in all of three weeks. So perhaps they'll pull something brilliant together this time too. You never know.
That said, I'd been trying my best to plug "Romans" by describing the lurid detail of my naked rape scene. So I thus have to say, not inappropriately, BUGGER!
Posted by John at Monday, April 14, 2008 1 comment:

Good Woman Of Setzuan, or, what John does with his nights. 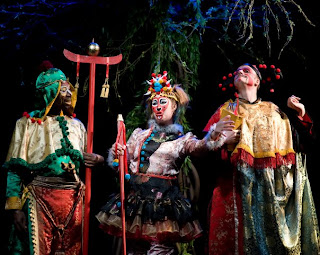 Which Shakespeare Play Are You?

You started out as good person, but as time goes on, you become more and more corrupt. You often seek the advice of witches.
Posted by John at Monday, April 07, 2008 1 comment: