Thanks to Sarah, AnnaLaura, Ian, Matt V, John RK, Felipe C, Ty H, Anne N, Anne V, the Fringe organizers and staff, friends, loved ones, supporters, and of course, everyone who came to see it.

Keep your ears open about a future remount!
Posted by John at Sunday, July 26, 2009 No comments:

Trey Graham (CityPaper) raves!
(Glen Weldon, also of the CityPaper, chimes in with his own capsule rave in the comments!)

"A Fringe Must-See..." "tremendous fun..."
"Bottom line? The notion that all the best writing is re-writing gets an admirably lucid, singularly entertaining proof
here." (TG)

"What could easily have come off as an intellectual exercise is given flesh — and not the too too solid kind — by a script that doesn’t merely note the differences between the text, but gets them to comment on one another. Smart, deft and fully realized." (GW)

Chris Klimek (Washington Examiner) lists us as one of the Ten Shows You Won't Want To Miss...
...and then raves in DCist!

"Pass with your best violence," Hamlet challenges Laertes in the play's climactic duel. But that line was, we learn, a replacement for one in the 1603 text that better describes Bad Hamlet: "Pass with your most cunning display." (CK)

"This is definitely a must see if you are a Shakespeare junkie like me." (2Hrs)

"The earnestly acted show [isn't] a nuanced consideration of the implications on character and theme -- but that's OK." (NP)

"Interesting concept marred by amateurish presentation." (KS)
(That's her entire review. She got a press comp to write six words.)

The Adequate Players present the World Premiere production of 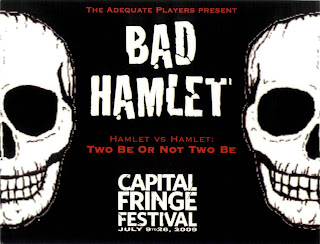 Venue:
The Bodega - at The Trading Post
1013 7th St NW, Washington DC, 20001
(Nearest Metro: Yellow or Green line to Mt Vernon Sq/Convention Ctr)
We apologize to patrons with disabilities, but the Bodega is not wheelchair accessible.

BAD HAMLET is an experimental performance piece that explores the similarities and differences between the two published versions of Shakespeare's Hamlet: the familiar version published in the 1623 Folio, and the unauthorized "Bad" Quarto published in 1603. The latter, a shorter, leaner, less poetic version of the story, has only recently been given its due. But simply to perform the Bad Quarto isn't enough: how do the two versions compare, complement or contrast with one another? Reading only gives the merest hint; Shakespeare’s plays were written to be performed, and thus we’ll take this literary comparison to the stage.

BAD HAMLET is a condensed, stereoscopic version of Hamlet in which the two texts are performed simultaneously; sometimes overlapping, sometimes in a Shakespearean 'tennis match,' with two Hamlets, two Ophelias, two Gertrudes, two Claudii, two Polonii, two Laerteses, and the Quarto's Player and Ghost, all under an hour, performed by a cast of six in a minimalist setting.

As a stereoscope takes two nearly similar photographs and combines them to create a 3D image, our goal, by simultaneously performing two versions of the same play, is for the subtle and not-so-subtle differences in the two texts to create a meta-Hamlet that provides additional depth and dimension to the emotions, motivations, and poetry of one of the greatest works of English literature. 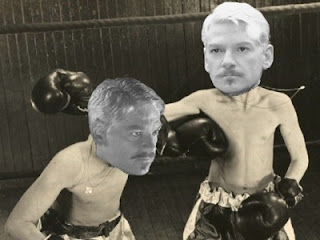