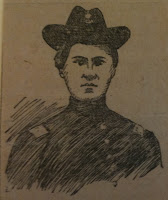 Out of the four Gray brothers (Robert H, Clarendon W, Augustus L and Madison J) of Stockton, Maine, who enlisted in the Union cause in the Civil War, only Clarendon returned, having seen every major battle from Bull Run to Appomattox. After the war, he served as a Boston police officer. This article, in a September 1897 issue of the Boston Evening Record (a precursor to the Boston Herald), features his Civil War service and his being awarded the Kearny Cross.

One of the possessors of the coveted “Kearney Cross,” awarded for especial and conspicuous bravery at the battle of Fair Oaks or Seven Pines, as it is sometimes called is Patrolman C. W. Gray of station 3.

It is a simple maltese cross, dangling at the end of a strip of red, white and blue ribbon, with the words “Kearney Cross,” engraved upon its face, but it is rich in signification, and its value to Mr. Gray cannot be estimated in terms of this world’s riches.

Mr. Gray comes from a family of men who were foremost in answering the call for the defence of the Union. Three brothers, with him entered in the army at the first summons of President Lincoln.

Three of the four brothers left their lives upon southern fields. Mr. Gray alone returned home after the bloody conflict.

And strangest of all the father of these four gallant men was a staunch democrat, bitterly opposed to the war and all that it signified.

It was a bitter irony that three of his sons should have given their lives for the cause to which he was so entirely hostile.

Mr. Gray was but 18 years of age when he entered, and two of his brothers were one and two years younger, respectively. Patrolman Gray is still a young man, and few people who see him on his daily beat would deem it possible that a man so youthful in appearance should have undergone such hardships and attained so great a proof of gallantry as the Kearney Cross.

When I questioned at the station house about the cross and the circumstances under which he gained it he was extremely loath to talk of the matter, preferring, as he said, to leave the relation of the facts to others.

He invited me, however, to come to his home, and see the trophy, and finally I obtained a recital of the circumstances from his own lips.

OF GOOD MAINE STOCK.
Mr. Gray and his brothers were of good old Maine stock, and they enlisted in the Third Maine volunteers. Their first experience under arms was at the first battle of Bull Run, in which engagement Mr. Gray was wounded in the thigh.

His corps was commanded by the gallant Gen. Howard. Mr. Gray fought in all the battles in which his regiment took part, but it was at Fair Oaks that he received the cross for his notable gallantry.

It was after a fierce engagement when the troops were resting after the heavy labor of the day. Mr. Gray, then a sergeant, with two other men of his regiment named Roper and Millano started out to do a bit of independent reconnoitering.

They went far beyond their own lines, and had almost reached the lines of the enemy when they noticed, under a tree a group of Confederate soldiers, who afterwards proved to be a Georgia colonel who was wounded, with five of his men as a body guard.

Their weapons were stacked against a tree nearby, and the men were reclining about apparently with feelings of great security.

“We slowly circled about them,” said Mr. Gray, “through the woods, and suddenly, when we were as near as we could safely get, we leaped out with a great shout and commanded to surrender.

“They were absolutely dazed, and almost before they knew what we were or what they were about, we had them ‘yarded up’ and on the way to our lines.

“But when that Georgia colonel came to his senses, and especially his sense of speech, the language he used was almost as focible as a charge of musketry.

PICTURESQUE SWEARING.
“It was the most picturesque swearing I ever heard, and if profanity could have availed we would have left our captives then and there and fled in terror to our lines.

“We were proof against his wordy assaults, however, and marched him and his men straight to camp, where, as you may imagine, we were received with great ovations.

“This was on May 3, 1863, and May 16 Gen. Braney, who commanded the Third Army Corps, issues a general order commending the splendid gallantry of our corps.

“At the same time the Kearney crosses were presented to the favored few. We were drawn up in line of battle, and Gen. Sedgwick, our division commander, passed along and pinned the crosses on the breast of our coats.

“We were told to wear them continually, and to keep them free from disgrace. We did not have to be told that, and my cross was never removed until the day Lee surrendered at Appomattox.”

THERE ARE TWO OTHERS.
So far as Mr. Gray knows, there are but two other men in this city who have the Kearney cross. They are George Woods, a baggage master at the B. & M. depot, and George Flynn, the janitor of the Lexington School at East Boston.

Both the other men who assisted in the capture of the Georgia colonel and his men were killed in later engagements. Millano was a wealthy Spaniard who left Spain for some political reason. He was killed one month before the expiration of his term of service.

Mr. Gray has, besides the Kearney cross, other tokens of his fighting days, which he values only less highly. Among these are the adjutant general’s report of the records of his three brothers.

Other mementoes are Mr. Gray’s corp badge, a diamond of red cloth which was worn on the cap, and a badge which was given him by his comrades when he was made lieutenant.

Mr. Gray is of the opinion, and it can hardly be disproved, that the record of his family cannot be duplicated among the soldiers of the United States who fought in the Civil War.

At the close of the war his corps was commanded by Gen. Miles, and thus, beginning with Howard, one of the most gallant of the surviving generals, he ended with Miles, no less gallant, who commands the army of today.