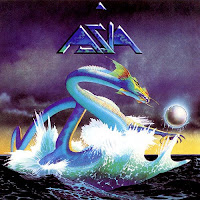 My iPod is set to album shuffle (and has been for several months; currently on song 6171 out of 7965), and today's album carrying me thru my drizzly morning commute was Asia's 1982 self-titled debut.

During my tweens this was one of my favorite albums, back before I discovered the progressive heavyweight bands that came to dominate my playlist in undergrad and after. Asia was a supergroup consisting of members of three leading prog bands that at the time had gone on hiatus: guitarist Steve Howe and keyboardist Geoff Downes had left Yes (who had broken up in '79 and were about to reform without them), drummer Carl Palmer had left Emerson and Lake (who then promptly re-formed with Cozy Powell... a theme?), and John Wetton was the bassist and vocalist of King Crimson before they evaporated in '74 (and had since, all together now, re-formed without him). Hell, even Roger Dean (who had a virtual monopoly on prog rock album artwork) designed the cover.

As the band's pedigree suggests, Asia is awash in the intricate stylings of the genre, albeit liberally peppered with hooks and pop references (i.e. the Spectoresque "Be My Baby" drumbeat in "Heat of the Moment"), but lyrically... well, nobody put it better than master critic Robert Christgau: "After listening to two lyrics about why they like their girlfriends, three about "surviving," and four about why they don't like their girlfriends, I'm ready for brain salad surgery."

I can't deny that Asia is full of catchy, hooky, guilty pleasures, but acknowledging so doesn't overshadow the sense that they're consciously dumbing down their songs to reach a mass audience. When you consider the artistic heights they had reached in their earlier bands, there's an inescapably condescending air pervading this album, which as an adult prevents me from embracing it the way I did as when I was twelve. It's like if the Beatles tried to write "I Wanna Hold Your Hand" after they'd done Revolver & Sgt Pepper. (also guilty: ELP's "Black Moon," Howe and Steve Hackett's "GTR", and any Yes song with Trevor Rabin in it)

And a side note - putting a year in a song lyric is almost always a bad idea. "And now you find yourself in '82 / The disco hotspots hold no charms for you" confines the album to a specific era, freezing it in time (and makes me feel really really old to think that this album came out twenty-seven years ago. I've dated people younger than this album).

(In the meantime, my shuffle has now landed on Yes's Tales From Topographic Oceans, which is either the peak or nadir of progressive rock. For me it's a bit of both, sometimes over the course of a single song. Still, the contrast between this and Asia is startling, and further confirmation of my above opinions.)
Posted by John at Wednesday, April 15, 2009

Email ThisBlogThis!Share to TwitterShare to FacebookShare to Pinterest
Labels: music, my iPod, reviews

It's funny when I go back and listen to the stuff I listened to as a moody pre-teen/teen.

Some stuff holds up well, some, not so much. I still like the odd Moody Blues Album for nostalgia sake, but my tastes nowadays veer from the extremes of Punk (Gogol Bordello) to Classical. Just a wee bit schizo in my tastes I think.