"Ephemeris, ephemeris. An actor's life for me"
from David Mamet's A Life In The Theatre
I have little opportunity to mourn Red Noses which closed Sunday, because Monday night we dove right into our first read-thru of Peace.

Brian Crane and I are the only carryovers from Red Noses (though Amber and Kaleigh will do props, and Jack is now coming up with the season's graphic design), and we both found it very unsettling to come in barely 24 hours later to find the theatre empty. The platforms, drapes and blacks are all gone. 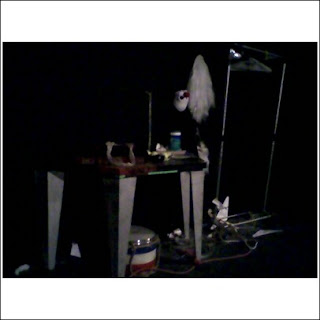 However, they did leave the small prop table and costume rack behind, and it still had a few props on it or near it. Flote's death mask, Toulon's wig and beard for when she played God, Bembo's drum, the Ravens' nooses, some tennis balls, a few damaged plastic noses, etc. A tiny island of memory in a vast empty room.

I think it would've been easier if that table wasn't there. We'll have various memories of putting on Red Noses, some joyous, some bittersweet, others just plain bitter. But there is an emotional pull in seeing those remaining items that I'd prefer not to have to deal with. It's over. Let's move on.

I recall working in an office some eight years ago, and dealing with the aftermath when a co-worker died in an accident at her home, and seeing her cubicle undisturbed for weeks afterwards (apart from flowers and stuffed animals left as memorials) grew increasingly distressing. The more we hang onto the past, the harder it is to move forward.

Impermanence is the nature of our profession. We work very closely, intimately, passionately together for a finite period of time, then we go our separate ways, sometime to work together again, sometimes to never see each other again. One thing I like about participating in a strike (in college or community theatre it's expected if not required) is the ritual of disassembly. It gives a definite sense of closure, like we're giving the production an honorable funeral. As I move up the career ladder of professional theatre, I don't participate in strikes as often; consequently I do miss out on the opportunity to definitively shut the door on one project before moving onto another.

The problem for me is that impermanence frequently bleeds into my 'real' life. For most of my adult life I bounced from job to job; restaurants and customer service for a while, then series of temp jobs with various companies. Working at the same place for more than a year is a rarity. In New York I lived in four different apartments in less than three years. Only one relationship in my life lasted longer than a year. Am I so accustomed to the impermanence of the theatrical life that I instinctively avoid commitments offstage?

Lately that's changed; I've got a full-time job (salaried, with great benefits), a new car, I've lived in the same place for nearly two years. This is the closest I've come to putting down actual roots. As for relationships, well, I'm working on that...
Posted by John at Wednesday, July 23, 2008