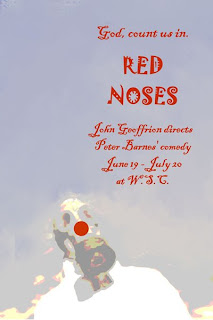 Critical opinion is decidedly divided over our production of Red Noses (runs thru July 20th). On the whole, the larger the circulation, the more vitriol.

I've been a critic. And I can defend the notion of dramatic criticism. There does need to be an evaluative voice to override the shrill shreik of the publicist. Word of mouth can only go so far; someone has to say that Theatre A, with millions of dollars in the bank, Broadway-quality production values, major actors in the lead roles, and a huge publicity machine occasionally does substandard, patronizing, passion-free productions, while Theatre B, with a non-Equity cast, and pennies to spend can occasionally do work that is exciting, daring, and moving. (and sometimes not)

But the professional drama critic works in a vacuum. They're not theatre people, although they may have acted in high school or undergrad. They can't be familiar with the hundreds of actors in this town, lest they find themselves with a conflict of interest. The nature of their profession leaves them on an island.

They have scant insight into the creative process, thus they assume that everything they see onstage is exactly what the producers intended to put there, that it's always a full conceptualization of the director's vision, and have no concept of the compromises that are a regular part of the process, particularly for groups that skew toward Theatre B's end of the spectrum.

I've encountered one critic who wrote a negative review in which he singled out a painting that was a major plot point for being "very obviously blank." What the critic failed to realize was that the performance he attended was a preview. The props mistress simply hadn't painted it yet. By opening, it was complete. Yet he took the show to task for its sloppy production values, mostly based upon his failure to realize that not every set, prop, lighting cue, sound effect, etc., is 100% complete during previews.

Specifically in regards to Red Noses:

Most of the major critics came to the same performance. Most were scheduled to come to the opening, but didn't, and came the next night. Our opening was packed, they laughed riotously, loved it, etc. And virtually no press. The next show: less than 20 people, including the critics. Not our best show, low-energy cast and barely a chuckle (some castmembers claim that the principal chuckler was actually one of the critics, the same one who would go on to complain that the play wasn't funny.) Every performance is different, the audiences all have a different energy, actors may be collectively energetic or lethargic, someone might screw up their lines, a set piece might fall over, a lighting instrument might fail, the sound computer might go haywire, etc. Thus is the nature of live theatre. Restaurant critics may dine 2-3 times before writing their reviews, but drama critics come once. And if it happens to be on a bad night, sucks to be us.

Many critics complained of the length of the play. It runs about 2 hrs 35 minutes, or about half the length of your average Eugene O'Neill play. A critic would have no way of knowing (unless they'd read the play) that we cut approximately an hour's worth of material out of it. We cut an entire scene, about three quarters of another, and made dozens of internal cuts.

Some critics (especially the ones who write for major papers) complained about the heat. We have one functional AC unit in the building. It makes a difference, but critics accustomed to the cushy & cooler conditions at Shakespeare Theatre still will grumble. WSC doesn't have $10k or so to upgrade their HVAC, and even if they did, they're moving out next year anyway, so there's no point. And of course the critics complain about the heat, having to suffer the ignominy of sitting in a comfy chair with a pen in their hand, not even considering the discomfort of the actors who have to spend that time running around in heavy costumes (one actor nearly passed out from heat exhaustion one particularly hot night).

The irony is that from the outset, we were under a strict directive from the artistic director (who is also in the play) to cut it down to 2 1/2 hrs, with the tolerance of the critics for the heat in the building in mind. So we were thinking of you. We actually had to make artistic choices based on the quality of our HVAC. Wrap your minds around that concept.

(Of course, one could raise the legitimate point that maybe WSC shouldn't use Clark St Playhouse during the summer. Certainly a valid point, albeit a moot one since this is their last summer there.)

One critic acknowledged the unusual situation under which our play was produced (Red Noses was a last-minute replacement for another play, The Romans in Britain; see earlier posts on the subject). Yet that critic went on to criticize our fairly low-tech set & lights, which to me is like pointing out that someone is a midget, but then blaming them for being too short. They failed to conceptualize the challenges inherent in switching out one play for another two months before opening. In our case, we lost about a third of the "Romans" cast to other projects, tried to find the best fits in "Red Noses" for those who remained, and then had to find capable actors for the open roles who weren't already committed to Cap Fringe, Source Fest, Forum's Marat/Sade, or any other show (success rate: B+). We lost most of our design team, leaving one person to create some four dozen costumes (success rate: A-). My co-director and I did a rough design of the set, and tried to find someone who was available to build it (success rate: D+), and roped together a sound designer (success rate: A-), props master (success rate: D), and a lighting plot based solely on the lights we had (no time/$$ to borrow or rent more, success rate: B+). Our early production meetings were spent haggling over what we could afford to do, how many actors we could afford to hire, etc. and our tech week was spent deciding what as-yet-unbuilt set pieces we could cut.

Thus is the critic's dilemma. They sometimes have an inkling of the process and its challenges, but they don't understand the full significance. Ultimately they're just professional audience members, with better writing skills. Usually.

The opinions that I do value are those of my fellow actors; especially the really perceptive, experienced, learned ones. Thanks to C.M. who said that no play in years had moved her to tears like ours. Thanks to L.Q. and L.S. who said this was one of the best plays they'd seen in DC. Their praise (or not, sometimes) is tempered with perspective. They know what we go through, because they do too. So you can guess whose opinions I listen to, whose criticisms I take to heart, and whose praise I value above all others.